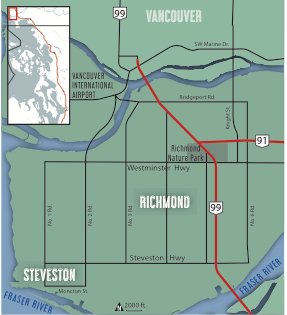 Richmond calls itself an “island city, by nature,” a tidy way of summing up its rich diversity.

Richmond, with the village of Steveston on its southern flank, grew on the seventeen islands of the delta where the Fraser River flows into the Strait of Georgia. Its roots as a farming and fishing community are still an important part of what is today a humming metropolis.

The Gulf of Georgia Cannery and the Britannia Heritage Shipyard national historic sites in Steveston bracket a cozy town center and a port that is home to Canada’s largest fishing fleet. Visitors can buy seafood right off the dock or enjoy the ocean’s bounty in the restaurants that line the river and the downtown streets. Steveston is also the jumping-off point for whale watching tours of Georgia Strait, where riders can see sea lions, orca whales and eagles.

On July 1, Canada Day, visitors flock to the Salmon Festival where 1,200 pounds of wild salmon are grilled over open fires. The festival also features a pancake breakfast, parade, live music and performances, cultural shows and a big fireworks display.

From the original Japanese and Chinese workers in Steveston’s boatyards and canneries, Richmond has grown into a community in which 74 percent of its estimated 220,000 inhabitants are of Asian heritage. It has been called the Asian food capital of North America – The New York Times has touted that it has the best Asian food in North America.

The Golden Village, a warren of mini malls between Garden City Road and No. 3 Road, is home to a dizzying array of restaurants from classical Chinese dim sum to pan-Asian fusion. In just three blocks of Alexandra Street, visitors will find over 200 restaurants. The area is also home to the Aberdeen Center, one of the largest Asian malls outside of Asia, and the Daiso Japanese megastore. Tourists can start their food adventure by walking the self-guided Dumpling Trail, a collection of 20 or so restaurants. There are two routes, one being a hole-in-the-wall version and the other an upscale restaurant version.

The Richmond Night Market at 8351 River Road is a great way to experience the Asian culture in Richmond. It is open weekends and holidays from April to October 10. The market has more than 120 food booths and 200-plus retail stalls, an entertainment stage and free rides. Discover authentic Asian snacks and street food such as tornado potatoes, grilled squid, dragon’s beard candy, bubble waffles and more. Visitors will also find retailers selling all kinds of goods at street prices. For more information, go to richmondnightmarket.com.

On rainy days, take the kids to Watermania to play in two large whirlpools, waterslides and catapult off spring boards. A stretch of No. 5 Road known as the Highway to Heaven is home to many places of worship, such as two spectacular Buddhist temples, showcasing the variety of faiths in the community. Many of the churches and temples are open to visitors.

Richmond is ringed by an extensive dike trail system, connecting dozens of parks. The Richmond Nature Park is 200 acres of the raised peat bog habitat that once covered the area, and five kilometers of trails invite visitors to explore its unique plants and animals. There are over 100 species of resident and visiting birds that can be seen throughout Richmond; visit Garry Point Park, Terra Nova Rural Park, and Iona Beach Regional Park to see bald eagles, red-tailed hawks, northern harriers, barred owls, sandpipers, killdeer and great blue herons. Nature lovers will want to keep their eyes peeled for turtles, river otters and sea lions.

In 2010, Richmond was one of the venues for the Vancouver Olympic Games and the legacy of the games continues in the magnificent Richmond Olympic Oval, which today offers a multitude of recreational and physical fitness opportunities. Try out their state-of-the-art Olympic and sport simulators featuring bobsleighs, kayaks, race cars, ski jump and Paralympic sit-ski.

As Richmond and Steveston fade into the rearview mirror, visitors will find themselves smiling with full bellies, wholly relaxed, holding onto memories of fun that will not soon be forgotten.

Other items that may interest you