A blend of history and beauty. 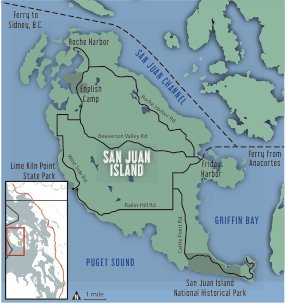 San Juan Island is the busiest of the islands. The ferry to San Juan Island arrives smack in the center of Friday Harbor, a charming town with lots of reasons to visit.

The island offers more restaurants, shops, galleries, and activities than anywhere else in the islands. Within the easily walkable 1-square mile town of Friday Harbor, visitors will find a full array of sophisticated cuisine along with casual pub fare, chocolate shops, ice cream shops, cozy bookshops, and quirky stores. Looking for more? In the mood for a movie? The island has had a movie theater since 1915. In the mood for disc golf? The island has that too.

The Whale Museum is located downtown, offering a look at some of the world’s largest endangered species. To help raise awareness of the plight of these iconic creatures, the museum offers symbolic orca adoptions. It was one of the first whale museums in the country. Be sure to visit the San Juan Islands Museum of Art, where travelers can view local art from around the islands.

Between the north and south ends of the island, visitors will pass through fertile farmland scattered with animal life. Don’t be surprised to see deer grazing amongst the cows as they are the most populous animal on the island. Watch out for these frequent road-crossers.

Look out for the alpaca farm, where visitors can purchase alpaca items with wool coming from the very alpacas in the field right outside!

Another popular farm destination is the Pelindaba Lavender Farm, located on Hawthorne Lane, with over 25 acres of lavender to explore. The store on the property offers lavender-infused foods, essential oils, soaps, and much more.

There are nine lakes on the island. Egg Lake is a popular swimming hole – turn onto Egg Lake Road from Roche Harbor Road.

While San Juan Island doesn’t have the mountainous terrain of Orcas Island, hiking options can still provide enough exertion to get the heart rate up. A 2.2-mile trek to the top of Young Hill will reward hikers with panoramic views of the islands from a breathless 600 feet of altitude. On the way up, hikers will pass the Royal Marine Cemetery.

Another worthwhile hike is one to English Camp which once housed British soldiers during the Pig War.

Of course, the west side of the island provides some of the best sunset lookout points.

Wander over to the 41-acre day use Lime Kiln Point State Park and, with a bit of luck, visitors will get to enjoy a show put on by orcas and transiting gray whales. It is considered one of the world’s best whale viewing locations and is worth a trip for it alone.

The second busiest town on the island is Roche Harbor, located on the opposite end of the island from Friday Harbor. The Hotel de Haro was originally built in 1845 as a Hudson’s Bay trading post and some of the original logs are still visible. Later, the island’s rich lime deposits struck the interest of Tacoma lawyer John S. McMillin. He decided to start the Roche Harbor Lime and Cement company in 1884. In 1954, Reuben Tarte purchased the land and transformed it into a hotel and added slips in the marina, making it the popular boating destination it is today.

The cabins that limeworkers once stayed in are now available for visitors to stay in along with the old Roche Harbor schoolhouse. McMillin’s home has been converted into restaurants where guests can find both casual or fine dining. The church the McMillin family built still stands and remains active today.

Ways to pass the time include a walk through the garden designed by McMillin’s wife, a hike around the lime quarries, or check out the McMillin mausoleum.

The resort includes amenities such as a spa, pool, tennis court, and liquor store. In the harbor itself lies a veritable fleet of privately owned yachts ranging in size from runabouts to ocean-going billionaire battleships, complete with helicopters. Traditionally at sunset, the flags are lowered to the recorded sound of Colonel Bogey’s March, a British march composed in 1914 by Lieutenant F.J. Ricketts under the pen name of Kenneth J. Alford.

Visitors can set their watches to island time for the duration of their stay on San Juan Island; the mainland and all of life’s everyday worries can wait.

Other items that may interest you